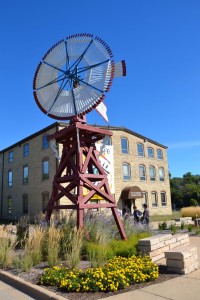 Batavia, Illinois is the oldest city in Kane County, founded in 1833. A “must see” when in Batavia, is the Early Woodlands Indian exhibit in the lower level of the Depot Museum (home to the Batavia Historical Society). Built on a solid industrial foundation, Batavia was known for the production of farm implement equipment and windmills, having been home to the well-known Newton Wagon Company, the Appleton, the Challenge and the U. S. Wind Engine and Pump Company. In fact, you can still see many of the windmills still spinning throughout the Batavia area. Presently, much of the industry in Batavia comes from Fermi Lab, a national laboratory specializing in high-energy particle physics and hosts scientists from all over the world. The Imago Theatre is also under the roof at Fermilab, featuring a number of cultural events, art, lectures and film series throughout the year.

Mary Todd Lincoln was once one of the 26,000 people that called Batavia home, having been an involuntary guest of Bellvue Place, a sanitarium for women that Dr. R. J. Patterson converted in 1867 from a private school that is still standing today and serves as a community residential building. 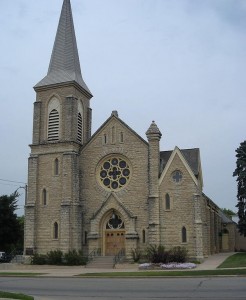 Like many of the surrounding neighborhoods, Batavia is ranked in the top 100 small towns to raise kids (according to BusinessWeek) complete with a strong school system. Batavia High School ranks 85th within the state of Illinois, is a designated a Grammy Signature School for excellence in music education (for the third consecutive year) and in 2013, the Batavia Bulldog football team won the 6A state championship and continues a strong tradition as the team that’s tuff to beat!
As part of Batavia’s vision and plan for the future, many revitalization projects have been and continue to be the focus of community attention and support. As a result, Batavia is the proud recipient of the “Best Street Award” in 2013 from the Illinois chapter of the Congress of new Urbanism for the city’s streetscape redevelopment of River Street near downtown Batavia. Also a bike friendly community, Batavia was designated a “Bronze Leve” by the League of American Bicyclists (one of only 6 communities in Illinois who receive this designation).

The team members at Next Door Garage understand that a new garage door or opener decision is a big one. We provide the tools, support, samples and assistance you need to make the right choice. If you want to see and hear how your Next Garage Door will work, we have working garage doors in our local entry door showroom. Click here to have one of our friendly, no-pressure specialists contact you about achieving your needs and home design goals. You are going to love what we do and how we do it, and we can’t wait to add you to our long list of satisfied customers from Batavia, Illinois!

Serving the Western Suburbs of Chicago, including these communities: